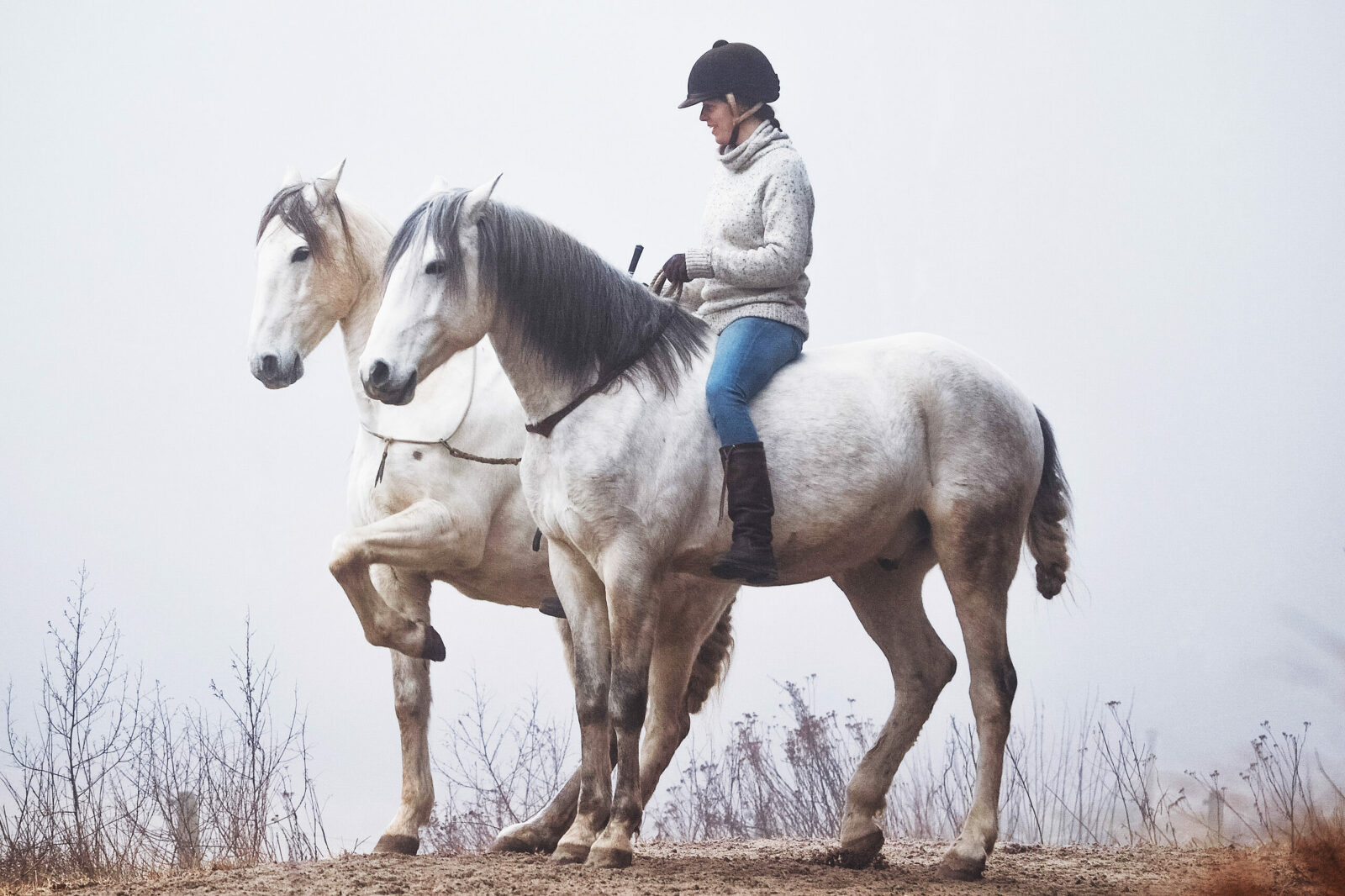 Norah's "horse career" began like so many others - at the stalls at the local riding school. She spent many hours for many years there and did "everything"; Learned to ride, tried vaulting, braided manes and tails until her fingers ached, competed in club competitions on the riding school ponies… And just got more and more horse crazy every day.

It was when she, eleven years old, met "C" (later Conny) that everything changed. He turned the game upside down and during their first years, he made Norah realise that she did not really know a thing about horses.

The interest in psychology was awakaned early on - why does the horse behave the way he does, why does he react in one way or another, and what role do we humans play in the way he thinks and feels about different things? Norah spent hours out in the pasture, sitting on a rock, studying the horses' interaction in the herd. She was determined to learn to "speak horse".

Over the years, Norah has sought inspiration and knowledge in many different corners of the equine world; For many years she trained regularly for Maria Gramén, who put into words the diffuse feelings and thoughts Norah had about being with Conny. Curiosity has led to both high and low and Norah has tried everything from jumping, dressage, Parelli Natural Horsemanship, driving, Ecole de Légèreté, western, vaquero, academic art of riding, clicker training etc. She trained for a couple of years for the Czech liberty dressage trainer Honza Bláha, before the interest in historical art of riding grew and she, among other things, went with Conny to the Fürstliche Hofreitschule in Bückeburg for training with Wolfgang Krischke. Susanne Lohas (Philippe Karl) has been a great source of inspiration and Norah trains for her when given the opportunity. In 2009 she took her first lessons in Academic Art of Riding for Christofer Dahlgren and trains with him a couple of times a year.

Many pieces of the puzzle have shaped the toolbox she carries with her today. Norah is very humble in the face of other people's philosophy and believes that there is something to learn from every meeting.

Psychology and understanding of the horse as a species leads the way in everything she does. Whether it is a showjumping horse or "forest dweller" does not matter at all - equipment and focus can vary but a horse is always a horse. Norah's goal is always for both horse and human to feel like winners.

Norah started teaching on a small scale in 2009, started her company in 2011 and today works with horses full time. 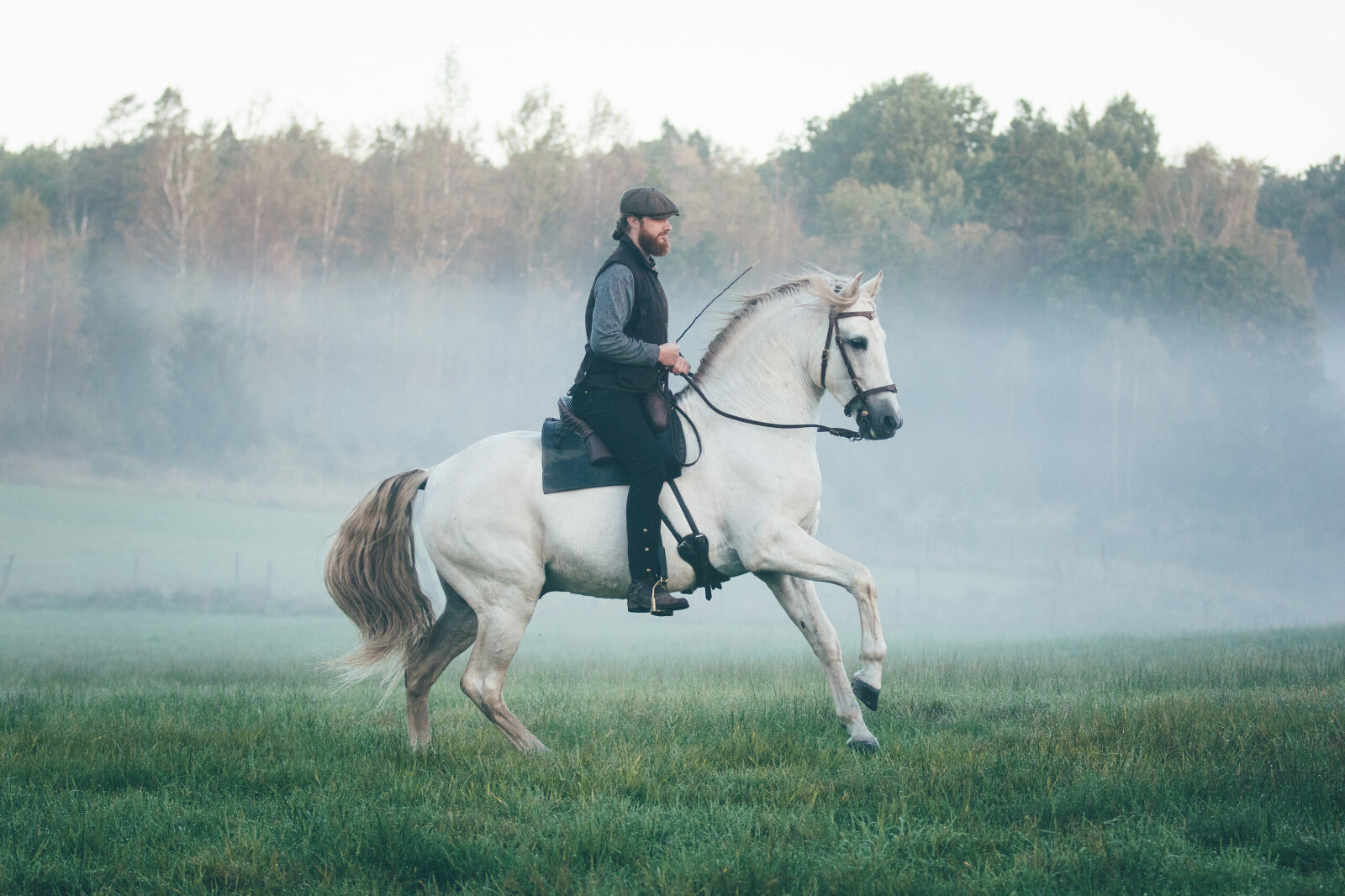 Joakim grew up on a farm with many different animals but it was primarily his mother and sister who was interested in horses throughout his childhood. Once in a while he joined them on a hack but his interest in riding had not been sparked yet. However, his interest in history had from the very beginning! One day he visited the Medieval Centre at Nykøbing Falster where he experienced a knight’s tournament and discovered it was possible to physically recreate and re-experience history. Motivated by this experience he started taking dressage and horseback jumping lessons, at the age of 16, on his mother’s Olderburgermare “Freja”, primarily because he wanted to perform at a knight’s tournament. The many lessons with “Freja” meant that his dream came true in the summer of 2006, where he rode his first tournament.

Joakim started studying medieval illuminated manuscripts where he saw that horses where often depicted in a round shape and nicely collected. It was not until he saw the front of a book about Academic art of Riding that he discovered it was possible to recreate the riding art of the past. Because of the experience he was determined to get his own destrier who could help him recreate. In the summer of 2009, he met his destrier to be for the first time, the P.R.E. colt “Absalon”. “Absalon” was not even a year when he got Joakim as his owner, but Joakim wanted to give Absalon the best conditions for a basic education, which was why he went on an internship at Michelle Wolf’s farm “Enggaarden – The School of Academic Art of Riding”. Since Absalon was not old enough, Joakim borrowed a P.R.E.-gelding “Linse” for the 3 months he did the internship, and together the learned basic groundwork.

Joakim began studying history after his internship in the fall of 2010, amongst other things, to be able to communicate history. With an elective in communication, interpretation and rhetoric he created a solid foundation to communicate history and since then he has worked as a guide and interpreter at the Medival Centre of Nykøbing Falster, The Royal Reception Rooms at Christiansborg Palace, Varberg Fortress and also as a teacher at University College Absalon.

As part of their studies, Absalon and Joakim went on an internship at the Fürstliche Hofreitschule in Bückeburg, in 2013. They had lesson from Wolfgang Krischke almost daily which meant their development skyrocketed. When they went home after 7 months internship Absalon did shoulder in, haunches in and renvers in all gaits, he had been ridden in armour, they had ridden their first joust and started working on canter pirouettes. It was an almost completely educated destrier Joakim took home from Germany, and together they performed at tournaments every summer in the years after. In 2016 Joakim had his master’s degree in history, with a specialty in knightly culture, where the horse played an essential part. In the fall of 2018, he and Absalon moved to Sweden and Joakim has offered lessons in historical dressage since the fall of 2020. Absalon and Joakim continue their journey to improve their skills and take lessons from Christofer Dahlgren a couple of times a year.